I am sure you have all been sitting on the edge of your chairs wondering whether the magic has continued.  And indeed it has.  The rain not only made the birds sing with joy, it  awakened the seeds that lay dormant in the earth for many years.  They sprung to life.  The kingdom was covered with flowers and trees of every kind.  The king was beside himself with happiness, as was the princess.  When the king declared “Surely some kind of magic has brought my kingdom to life.”,  the artist appeared.  “It was your daughter!”  He explains to the king how his daughter asked him to paint the birds.  Then he said, “Nature seen through the eyes of a child is a magical thing.”  As for the Chief Adviser, after several days of observing this transformation, he declared, “It is truly an enchanted kingdom!” 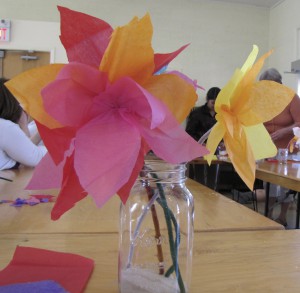 We made flowers from tissue paper, with pipe cleaner stems and set them in mason jars in which sand had been poured to stabilize the jars.  They were placed behind the sand dunes and appeared at the appropriate moment.  We also brought in  spring blooming flowers to decorate the room.

On the last day, we traipsed to a near-by park with the flowers, the birds and lots of fruit and other food for a final celebration picnic where we reenacted  some of the circle games and of course, ate! It was truly wonderful. 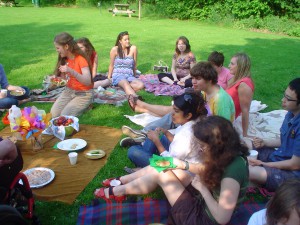 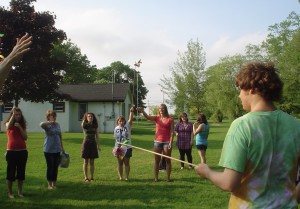 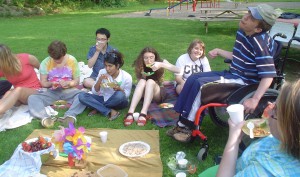